Showing posts from September, 2021
Show all 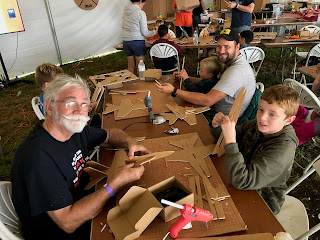 It's been a while since my last post.  In July my father, my son, and I traveled to Malvern, OH, for the annual Flite Fest RC festival hosted by Flite Test.  I took the Osprey with me to show off with the hopes of a demonstration flight, but it was not to be. I noticed prior to leaving for Ohio that one of the ball links on the left swashplate had stripped out and was loose.  I attempted to glue it back in with CA glue as an extreme thread locker, but it came loose during the 1500 mile trip.  At the festival I tried to glue it again with some epoxy, but it came loose again in handling at the festival.  Without any additional supplies on hand this meant that any demonstration flights were cancelled. When I got home I was able to repair the swashplate and ball link by drilling out the ball link itself and threading it with a 2-56 thread.  The original threads were 2mm and 2-56 is just slightly larger at 2.18mm.  I also drilled and threaded the swashplate for 2-56.  I used a short sec
Post a Comment
Read more
More posts

Brian Jones
I've been interested in all things electronics since I was a kid and got one of those 99-in-1 kits with the spring posts and a bag of wires. I got into radio-controlled flight around 2010. My dad has been flying RC for as long as I can remember, so it seemed pretty natural. I'm currently into my 2nd big project constructing a scale V-22 Osprey helicopter/plane. The first big project was a Harry Potter whereabouts clock that is documented on this blog as well.